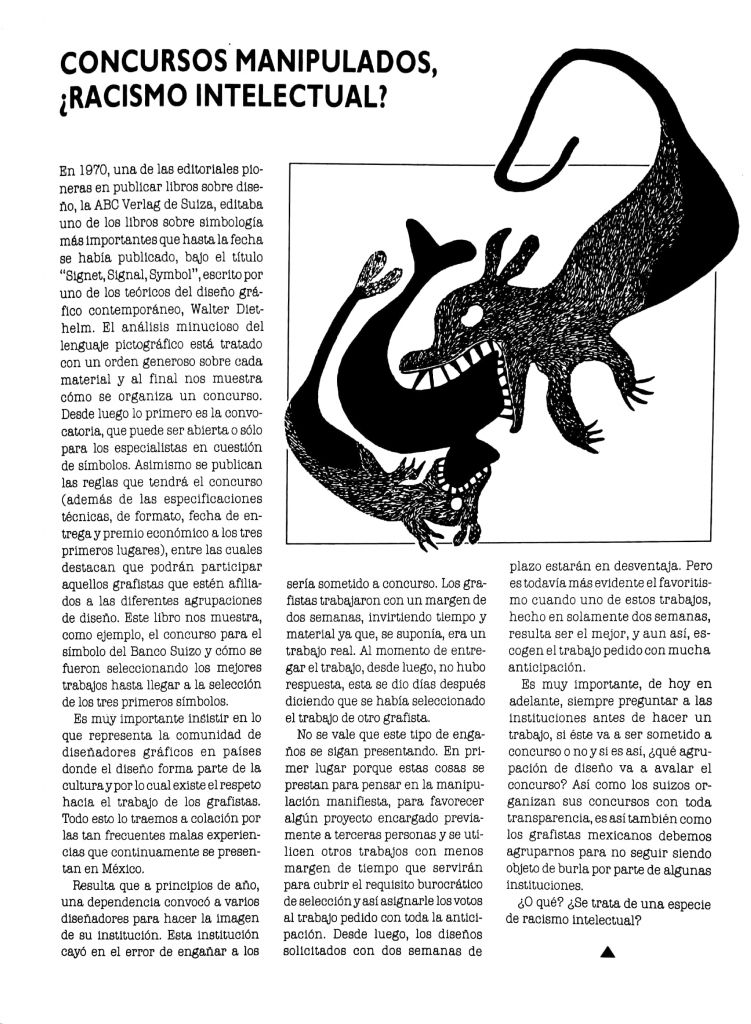 In 1970, one of the pioneer editorials to publish design books, the ABC Verlag in Switzerland, was editing one of the most important symbology books so far, titled Signet, Signal, Symbol, written by one of the Swiss theorists of contemporary design, Walter Diethelm. The thorough analysis of pictographic language is treated with a generous order about each material and, at the end, it shows us how a contest is organized.

Of course, it starts with a call, which can be open or for symbol specialists only. Also, the contest rules are published (as well as the technical and format specifications, deadline, and economic prize for the first three places), where they highlight that graphic artists who are members of the different design groups will be able to participate. By way of example, this book shows us the contest for the Swiss Bank symbol, and how they selected the best works until they reached the first three symbols.

Insisting on what the community of graphic designers represent in countries where design is part of their culture and that it is the reason respect for graphic artists’ work exists is very important. We bring all this up due to the very frequent bad experiences that are constantly presented in Mexico.

Turns out that, at the beginning of this year, an agency opened a call for designers to make the image of their institution. This institution made the mistake of not telling the graphic artists that their work would be submitted to a contest. The artists worked within a two-week time frame, investing materials and time since, supposedly, this was a real job. Of course, when they turned their work in, there was no answer; it came until some days later when they said another artist’s work had been selected.

It is not fair that this kind of deception is still present. First, because these situations may seem like evident tampering to favor a project previously commissioned to a third party and to use other work with a shorter time frame for fulfilling a bureaucratic selection requirement, giving then the votes to the pre-requested order. Of course, the designs requested two weeks in advance are at a disadvantage. But bias is even more evident when one of these works, made in only two weeks, turns out to be the best one and the pre-requested work still gets chosen.

From now on, it is very important to ask institutions if your work is going to be submitted to a contest or not before doing anything; and, if so, what design group will be endorsing the contest? Just like they do their contests transparently in Switzerland, Mexican graphic artists should gather together to stop being some institutions’ laughing stock, or, is this some kind of intellectual racism? [sic]